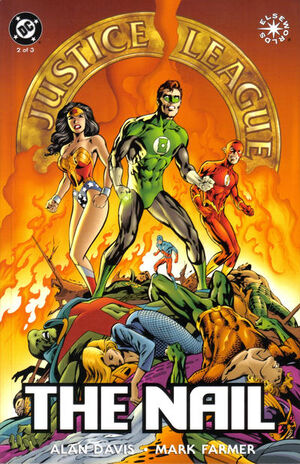 Master Bruce hasn't spoken a word since returning. I fear he found his way back here purely by instinct. After all he has endured, there is nothing left. Perhaps not even the will to live.

In Metropolis, Lois Lane is at a traffic checkpoint and she sees a newscast on WGBS saying that Batman has killed the entire staff and inmates of Arkham Asylum.

In the Batcave, Batman returns to the cave carrying an unconscious Selina Kyle. He tells Alfred Pennyworth that Batgirl and Robin are dead.

At Justice League America headquarters, the Leaguers decide that the deaths at Arkham are part of the emerging anti-metahuman movement and decide to discreetly try and find out who or what is behind it.

Flash (Barry Allen) checks out various criminal headquarters and discovers they have been destroyed. During his exploratory run, Flash happens upon Amazo fighting Ra's al Ghul. He defeats Amazo. Ra's tells Flash that he and the League are facing a master strategist who will pit others against them.

In Metropolis, Metamorpho kills Perry White. Jimmy Olsen tells Lois Perry was about to reveal the location of a secret alien research facility in Smallville, Kansas.

Elsewhere, The Outsiders find Simon Stagg and Java dead. They break into Superman's Fortress of Solitude and are taken down at super speed.

Lois tours the alien research facility and as she is leaving, one of the scientists gives her a business card for the Kent's Farm with the words The Truth written on it.

In the street, Metamorpho fights three armored soldiers. Martian Manhunter involves himself, fighting with Metamorpho. As Metamorpho dies, he tells Manhunter that he was forced to do what he did.

Metamorpho leaps into a building to find a star shaped creature that blasts him from the shadows.

At the Kent's Farm, Lois is told that the alien research facility is actually used for experimentation on aliens, something not included in her tour.

Retrieved from "https://heykidscomics.fandom.com/wiki/Justice_League:_The_Nail_Vol_1_2?oldid=1438742"
Community content is available under CC-BY-SA unless otherwise noted.