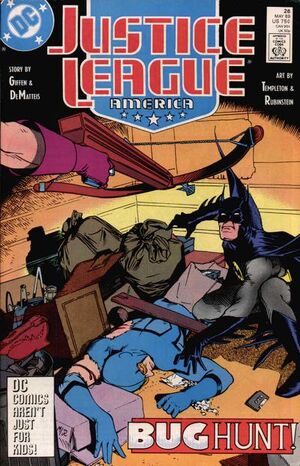 Appearing in "Slice and Dice!" or "There's Something Very Wrong with the Blue Beetle!"Edit

Synopsis for "Slice and Dice!" or "There's Something Very Wrong with the Blue Beetle!"Edit

During a fight scene, the Huntress eludes Batman's notice, and darts off into the shadows. When he spins around to find her, Batman quips, "Now I know how Jim Gordon feels". This is a reference to the numerous times that Batman has left Commissioner James Gordon talking to himself on the roof of Gotham City Police Headquarters.

Retrieved from "https://heykidscomics.fandom.com/wiki/Justice_League_America_Vol_1_26?oldid=1713053"
Community content is available under CC-BY-SA unless otherwise noted.