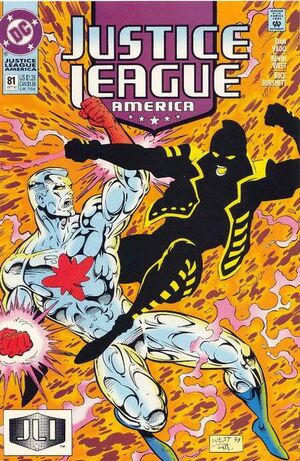 Appearing in "Do the Right Thing"Edit

Synopsis for "Do the Right Thing"Edit

The Justice League fight Captain Atom and his Peacekeepers over the fate of fugitives Blake and Corbett, who appear to be innocent men. The League get the upper hand and take the two men back to their headquarters, where a diplomatic nightmare begins - the American government insists that they should be handed over to their Kerrilian pursuers, but Wonder Woman is adamant that proper extradition procedure should be followed - Blake and Corbett should be properly tried. As all interested parties converge on New York City, the situation becomes extremely tense.

Meanwhile, in Norway, Ewald announces that his father, King Olaf, has passed away in his sleep, and that he is now the king.

Retrieved from "https://heykidscomics.fandom.com/wiki/Justice_League_America_Vol_1_81?oldid=1437951"
Community content is available under CC-BY-SA unless otherwise noted.