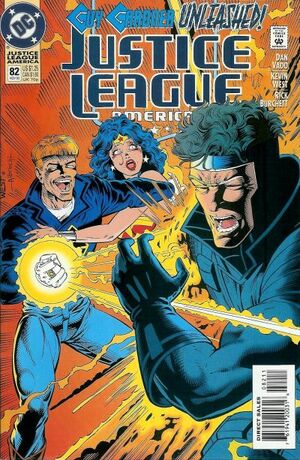 Appearing in "Guilty as Sin"Edit

Synopsis for "Guilty as Sin"Edit

In the Norwegian kingdom which Ice calls home, her brother Ewald's evil intentions become quite clear as he begins to assert control that is not rightfully his. Meanwhile, the Justice League continue to defy the American government over the fate of criminals Blake and Corbett. Even when Blake unsuccessfully attempts to rape Fire, Wonder Woman insists that they must be given a proper trial prior to extradition by the Kerrilians. However, matters come to an unexpected conclusion when Guy Gardner kills Blake in front of many witnesses and quickly leaves.

Retrieved from "https://heykidscomics.fandom.com/wiki/Justice_League_America_Vol_1_82?oldid=1303361"
Community content is available under CC-BY-SA unless otherwise noted.