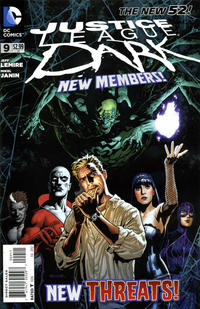 The Black Room is a Justice League Dark storyline written by Jeff Lemire and illustrated by Mikel Janin. It's the beginning of Lemire's run on the Justice League Dark title, following the end of Peter Milligan's run. They previously appeared in the I, Vampire crossover Rise of the Vampires.

Steve Trevor of A.R.G.U.S. commissions John Constantine to reassemble Justice League Dark for another mission. The League is asked to take down Felix Faust in South America and extract agent Doctor Mist. In exchange Trevor agrees to give Constantine ten minutes alone in the Black Room, the government's secret depository of mystical artifacts. Constantine, Deadman and Zatanna are sent in with Andrew Bennett and ARGUS agent Black Orchid. Taking down Faust, they steal the tesseract box he's using and realize it's a map to the Books of Magic.[1] Constantine takes them back to his home in the House of Mystery to decide what to do. Bennett considers his debt paid and quits, but Constantine reveals he can recall visitors to the house at any time. When they open the box, it releases the Demons Three and they take it back to their master. Faust is locked up in A.R.G.U.S. Headquarters under interrogation by Steve Trevor, and the demons break him out of prison.[2] The League teleport in to support Trevor and fight the Demons. Constantine is finally given access to the Black Room so he can fight Faust. Madame Xanadu begins searching for Tim Hunter, the only mage pure enough to possess the Books without becoming corrupted. Faust gets Constantine alone and reveals he has manipulated him into opening the map. Doctor Mist reveals himself to be a traitor when he blasts Constantine from behind.[3]

Continued in Justice League Dark: War for the Books of Magic.