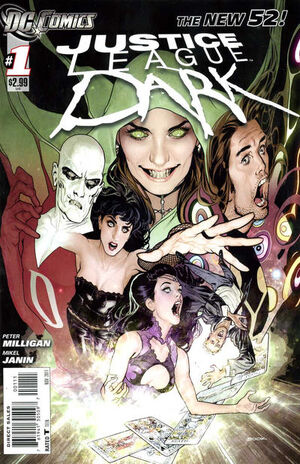 Appearing in "In the Dark, Part One: Imaginary Women"Edit

The witch known as The Enchantress has gone mad, unleashing forces that not even the combined powers of Superman, Batman, Wonder Woman and Cyborg can stop. And if those heroes can’t handle the job, who will stand against this mystical madness? Shade the Changing Man, Madame Xanadu, Deadman, Zatanna and John Constantine may be our only hope – but how can we put our trust in beings whose very presence makes ordinary people break out in a cold sweat?

Retrieved from "https://heykidscomics.fandom.com/wiki/Justice_League_Dark_Vol_1_1?oldid=1660714"
Community content is available under CC-BY-SA unless otherwise noted.