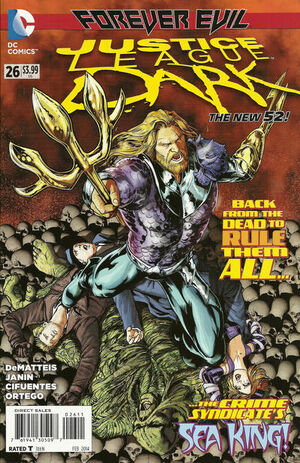 Doesn't take a genius to know where they're going: up... To a world that's already bearing the weight of so much darkness... that a little more just may break its back.

Appearing in "The Haunted Sea"Edit

Synopsis for "The Haunted Sea"Edit

John Constantine and the rest of his cobbled together Justice League Dark have been killed, having lost their battle with Blight. They now find themselves floating aimlessly in an otherworldly plane, taunted by their murderer, who reminds that they cannot hope to stop an evil that resides within all of humanity. The game of heroes and villains that they play is a lie - everyone has darkness within them. Everyone is a villain, under the right circumstances. Contemptuously, he crushes John's decapitated head in his fist.

At that moment, John finds his head in the hands of Deadman, who warns that while John may have brought the Blight out of collective consciousness into the real world, he remains the only hope for he, Zatanna and the rest of the original Justice League Dark. John is skeptical, but his doubt is swept aside when he realizes that he and the others are being pulled out of the darkness and into the light.

They emerge from the darkness in the penthouse of Dr. Thirteen. Thanks to Nightmare Nurse, whose quick decision to use the mystic mark of Dun-Kon-Wen placed them into something like a coma, sparing them from real death. She lured Dr. Thirteen to bring them back to life. It had all been a ruse to make Blight think it had won - otherwise, they all would surely have died. In any case, their last-ditch effort did nothing to help defeat Blight, and John has come to the conclusion that defeating Blight might not be the way to get his friends back. Rather, he may have to get his friends back in order to defeat Blight.

John explains that while they had to defeat Blight to remove the psychic static preventing them from finding his friends, somehow, Deadman had found him instead. The others, though, doubt that the vision John saw was real, and must verify it for themselves. Fortunately, the vision proves true, and Pandora's analysis lets her know where Deadman is. Unfortunately, in the meantime, both Dr. Thirteen and the Phantom Stranger have disappeared. Swamp Thing suggests that the Stranger has gone after the boy, Chris Esperanza, whom Blight has taken as host. This is the case, and he has brought Dr. Thirteen with him.

Pandora reveals that Deadman is somewhere in the Western Pacific Ocean, and so they ride on the Swamp Thing's back, deep underwater, wondering what a ghost might be doing there. After coming to the bottom of the sea, they begin to wonder if Pandora was right, until they pass through a mystic portal and find themselves in another world within the ocean. Pandora names the place Nan Madol, an undersea kingdom that thrived and fell a million years before even Atlantis rose. Swamp Thing, meanwhile, finds that The Green of this place differs from what he is used to, but all the same, he attempts to commune with it.

As he does so, Swamp Thing senses the presence of Sea King's body, returned to the ocean by the Crime Syndicate after he died on the way through Pandora's Box. The magic of Nan Madol dragged him down into it, and the emotional residue of the place embedded itself in his corpse to make it live again.

They had come looking for Deadman, and instead have found a dead man, resurrected by the frustrations and pains of the former residents of the mystic city. Pandora warns John not to fight him, but John can't help himself, and soon Sea King has raised monsters from the deeps to aid him in battle - a battle that will take place outside of Nan Madol, in their sea. John suggests that the other three go after Sea King and his army while he continues the search for his friends. Annoyed, Pandora explains that the reason she had tried to tell him not to attack Sea King is because Sea King is Deadman.

They return to the surface to find Sea King attacking a small ship's crew, whom they spare no effort to save. After being assured that Deadman really is inside Sea King's body, John borrows one of Pandora's knives and uses a severing spell by embedding the blade in Sea King's brain. Soon, the spirits are returned to Nan Madol, and Deadman's voice comes from the corpse's mouth. He explains that when the Syndicate attacked, he hid inside the corpse, only to find that the residual echoes of Sea King's personality were so powerfully twisted that they corrupted his mind, sending him into a dissociated state. John removes the last traces of Sea King's personality from the body, but locks Deadman inside, refusing to explain why.

In the meantime, though, the Phantom Stranger has turned on his former allies, and joined with Blight.

Retrieved from "https://heykidscomics.fandom.com/wiki/Justice_League_Dark_Vol_1_26?oldid=1438012"
Community content is available under CC-BY-SA unless otherwise noted.