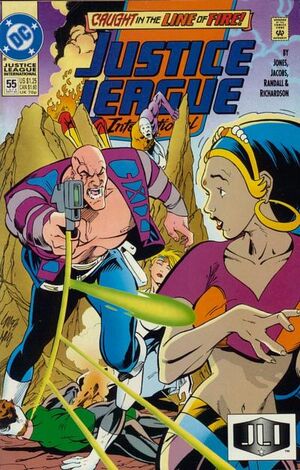 Appearing in "Lest Darkness Fall"Edit

Synopsis for "Lest Darkness Fall"Edit

The creator of the JLI's robot bodies, Diderot, takes them to the 70th century, where his robotic people are under threat from a human named Alaric. The Leaguers are drafted in to the fight against Alaric, but one by one are captured by him. Meanwhile, Sue Dibny seeks out the mysterious, powerful Godfrey and gets him to find the JLI. Re-united with their true bodies, the heroes return to their own time.

Retrieved from "https://heykidscomics.fandom.com/wiki/Justice_League_International_Vol_2_55?oldid=1438121"
Community content is available under CC-BY-SA unless otherwise noted.