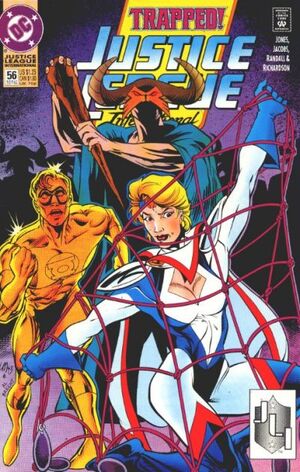 What's the matter, Hal? Are you feeling nostalgic for the good old days when your teammates were normal heroes? Like Martians and winged people?

The JLI come under attack from a group of druids in their own headquarters. The druids are specifically prepared to deal with the League's most powerful members and plan to burn both the heroes and their castle as punishment for interfering with the plans of their Aztec brethren.[1] However, the League has some unexpected allies, including Duke Donald. The Duke's ghost inhabiting his armour is under a spell of silence, but this is broken when another astral being, which can inhabit bodies, speaks to him. This being is fond of Doctor Light and tries to save her from the druids, but before too long, she is captured as well, leaving none of the JLI free.

Retrieved from "https://heykidscomics.fandom.com/wiki/Justice_League_International_Vol_2_56?oldid=1438122"
Community content is available under CC-BY-SA unless otherwise noted.