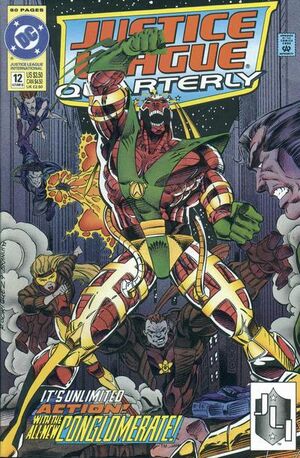 This is not your father's Justice League.

A terrorist cell known as the Blood Jihad attacks LaGuardia airport in New York and takes hostages. The super-hero team the Conglomerate arrives to save the day, and coincidentally enough, a throng of reporters are present as well. The Conglomerate manages to disarm the terrorists and rescue the hostages, but one of the reporters, Wally Tortolinni, notices that one of the Blood Jihad's hostages is actually a paid actress. He rushes back to his editor to tell him that the Conglomerate staged the entire event as a public relations scam.

Back at their headquarters, the Conglomerate begin to suspect the truth about their battle at the airport and consult with their business manager Claire Montgomery. Claire assures them that their efforts are in fact legitimate.

Meanwhile, scientists at a Stagg Industries robotics plant assemble the crated remains of the android known as Amazo. The robot suddenly springs to life, kills several workers, then stalks off in search of more prey.

Claire sees video surveillance of Amazo tearing up the streets of New York and orders the Conglomerate into battle. Their fight takes them to Central Park West where a concert is being performed. Amazo begins duplicating the team's powers including Templar's telekinesis and Hardline's vibration abilities. Echo however, has the ability to turn an opponent's power against them, and uses this to keep Amazo at bay. While the robot is distracted, Nuklon pounces upon him and tears out his robotic innards. Witnesses to the battle cheer for the Conglomerate and Claire Montgomery is satisfied that her team has been validated.

Appearing in "On the Road"Edit

Synopsis for "On the Road"Edit

Ice decides to take a small vacation from the Justice League. She wants to explore the American Southwest, but no other League members wish to accompany her. Finally, Kimiyo Hoshi, aka Doctor Light, agrees to travel with Ice so that she might attend a solar conference in New Mexico.

The two heroines travel by car, but elect to not use any of their powers to assist them. Their car breaks down in the middle of the desert and they have to walk several miles before finding an auto-garage. The mechanic is uncooperative and dismisses Kimiyo's urgency to repair the vehicle. Meanwhile, Ice is accosted by a group of bikers. Kimiyo manages to effect ample repairs to the car on her own, and the two drive off. The car soon stalls though and the bikers catch up to them. Ice finally relents and uses her powers to freeze the leader of the biker gang into place. Kimiyo then returns to the mechanic and forces him to finish repairing the car in a timely manner.

In Portland, Oregon, Special Crimes Unit detective Jason Praxis and his partner Deena Walker continue searching for serial killer Dexter DeFarge. They find evidence of his activity in the middle of a forest and follow the trail to a nearby town. Praxis and Deena stop at a diner for a bite to eat and Deena asks him how he came upon his Metahuman abilities. Praxis tells her that he didn't have powers until his first encounter with DeFarge. Moments later, the driver of an eighteen-wheeler loses control of his vehicle and begins veering towards the diner. Praxis races outside and uses his electrokinetic powers to save the driver's life.

Meanwhile, Dexter DeFarge kills a jogger named Cliff Harker in an alleyway. He brings the body back to his lair as a sacrifice for a demonic entity. The demon tells DeFarge that he still has several more sacrifices to make before the demon is powerful enough to escape his imprisonment.

Retrieved from "https://heykidscomics.fandom.com/wiki/Justice_League_Quarterly_Vol_1_12?oldid=1438545"
Community content is available under CC-BY-SA unless otherwise noted.