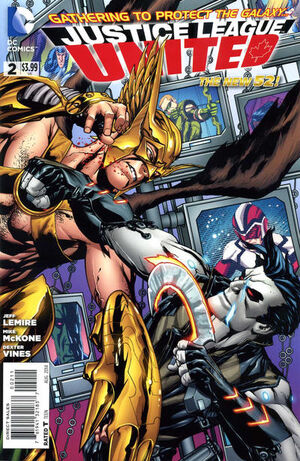 Miiyabin Marten and her friend Heather return to the forest in Moosonee, Ontario, where Miiyahbin swears that she saw American heroes fighting monsters. Though Heather doesn't believe her at first, they soon see for themselves that the secret alien base the heroes uncovered there remains there. While they explore it, they are suddenly attacked by a horrifying creature, who grabs Miiyahbin, and when Heather turns to look for her, she is gone.

Meanwhile, on the planet Rann, Stargirl and her friends try to get their bearings, having been suddenly teleported into what Martian Manhunter can only determine is in the Polaris System. The realization that they are not in Canada anymore leads Green Arrow and Animal Man to fall into a bickering match which they become so consumed by that they fail to notice the monster they'd fought the day before has caught up with them, and threatens to crush them under-foot.

Stargirl is wary of using her Cosmic Staff to fight the thing, because every time she hits it with a beam from the rod, the creature changes forms - and some forms are harder to fight off than others. Fortunately, they have unexpected help from Supergirl. Before Kara can deal with the creature herself, both the creature and the Earth-heroes are confined to containment fields.

The stasis shells were activated by the natives of the planet, who explain that the rogue hybrid entity the heroes have been fighting feeds on cosmic energy, and by reducing its access to that stimulus (the Cosmic Rod), they can shrink it down to a manageable size. The leader of these people, Sardath explains that they are on his planet of Rann, and that the alien visitors must remain his prisoners until he determines that they are not a threat.

When Sardath realizes that the Manhunter is a Martian, he becomes worried about psycich invasions, but he is too slow to prevent J'onn from stepping through the stasis shell and grabbing him to demand just what is going on.

Meanwhile, on the Moon of Thalsalla, Byth Rok reveals the child Ultra - a hybrid of multiple aliens. One day, he explains to Alanna Lewis, this baby will grow into the most powerful creature in the universe. Hearing that the prisoners will no longer be needed for DNA samples, Lobo is eager to see them all killed, but he is attacked suddenly by Hawkman and the other escapees. He is disgusted to see Byth there, after the Daemonite incursions on Thanagar. While he and Lobo fight, Byth becomes preoccupied with Ultra, warning that the time of the baby's awakening is upon them.

Sardath explains that his people are pacifists - which is part of what caused the problems they now face. The Zeta Beam was what brought the visitors to Rann, and they are the first humans ever to make that journey - which means they don't have Adam Strange's fiancée Alanna with them. Still there are more questions to be answered, such as what the Rannians were doing in the bunker in Moosonee, not to mention the hybrid entity. Sardath explains that the things the heroes encountered down there only became threats after Byth got hold of them, and he is likely responsible for Alanna's disappearance. Everything that has occurred began with the best intentions as something called the Ultra Project.

Sardath explains that the Polaris and Vega Star Systems have been plagued for years by interplanetary war. Thanagar and Czarnia had been at the heart of it for some time, but others like Psion and Tamaran have stakes in the conflict. As such, vultures like the Dominators and Daemonites have taken advantage of the instability. Rann, unfortunately, has stayed neutral, using technological prowess and ingenuity as their own strengths, but neutrality led to their being caught in the middle. They began to take on refugees, and of like minds, they worked together to bring about a ceasefire. However, they knew the conflict would reach a boiling point again, and it was suggested that they create a weapon. Sardath opposed this, suggesting instead that they create a symbol of unity in a child whose genetic heritage would come from all of the races with a stake in the system. This would be Ultra, a multi-alien, and a being of pure science.

However, they knew that they could not simply make the child representative of a few planets. It was necessary to get samples from every planet in the galaxy, including Earth. Nobody was harmed or kidnapped until Byth found out about the project. He discovered the earth lab and used his abilities to pose as Sardath to infiltrate the team. He killed them, returned to Rann, and took the project for himself. Sardath's people have since tracked Byth to the Thanagarian moon of Thalsalla. When he learned this, he attempted to contact some of Earth's super-humans to ask for help - but if the shared look of suspicion on his guests' faces are any indication, it is not going well. Despite that, J'onn concedes that it is only just that they help for the sake of the galaxy.

Byth, meanwhile, is eagerly anticipating the imminent awakening of Ultra when the Justice League arrives via Zeta Beam. Happily, Adam reunites with Alanna, but they are all too late to stop Byth's plan, and the baby's awakening is punctuated by a violent blast of energy.

Retrieved from "https://heykidscomics.fandom.com/wiki/Justice_League_United_Vol_1_2?oldid=1438594"
Community content is available under CC-BY-SA unless otherwise noted.