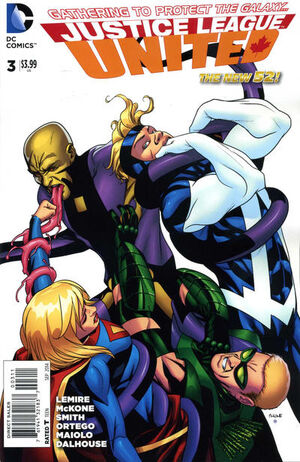 I know you, Buddy Baker. You have a wife and child on earth, yes? And you Adam... you have Alanna. And I-- I have no one. So just-- just promise me one thing-- make sure you bury me on Thanagar!

In Moosonee, Ontario, Miiyahbin Marten wakes in a cave to the sound of another person's voice, commanding her to wake up. Her arms have been restrained, and seeing the silhouette of another person ahead of her, she calls out for help, thinking it is her friend Heather. Instead, it is an older man who warns that only she can help herself get free. Confused, she demands to know who he is, and he says only that he is one of "The Seven." From deeper within the cave, she hears the growling of the Whitago, and begs more insistently for help. The man replies that she can save herself. The Seven live within her. the Whitago lives within her. The choice is hers to give in to it, or make it go away by speaking the one word. She refuses, as the man transforms into the Whitago before her eyes.

In the Citadel of Ranagar, Dr. Sardath learns that Byth Rok's satellite was destroyed with the Earth-heroes they called for help still on board. Fortunately, he initiated an emergency Zeta Beam which managed to pull Hawkman and Adam Strange to Rann - including Byth. Alanna Lewis and the others are nowhere to be found. However, Byth's arrival with the multi-alien baby means they have no time to worry about that.

Alanna and the other heroes of the Justice League arrive unexpectedly in the Rannian desert. Their eyes are drawn to an explosion from the visible capital, which Supergirl's telescopic vision confirms came from the baby and Byth. Unfortunately, they were accompanied to the desert by the bounty hunter Lobo. Supergirl has an unpleasant history with him, and when he attacks her, she reacts angrily, punching him into the atmosphere. She warns that he will come back, and Martian Manhunter reminds that their priority should be with stopping Byth and the baby. Kara can either chase Lobo or join them. Before she can answer, Alanna suddenly disappears, and is replaced by Adam Strange. Something must be very wrong with the Zeta Beam.

Sardath struggles to recalibrate the Zeta Beam, commenting that the transportatio nof Ultra must have affected it in unanticipated ways. Hawkman points out that Byth and the baby are long gone, as Alanna and Adam switch places again. She re-materializes in mid-air, as Adam was flying toward the citadel at the time. Fortunately, Animal Man is there to catch her as J'onn warns that Ultra's agitation is threatening to cause another event, soon.

Finally, they arrive, and reunite with Adam and Hawkman, but the Zeta Beam's malfunctioning begins causing Alanna and Adam incredible pain. Desperately, Sardath attempts a stopgap solution by sending Alanna back to Earth. Unfortunately, if he can't fix the Zeta Beam, they won't be able to get home and Ranagar will be destroyed. Manhunter decides it would be best to leave half the team with Sardath while the other seeks Ultra and Byth.

Elsewhere, Byth marvels at how fast Ultra is growing when he is cornered by J'onn, Supergirl, and Star Girl. Angrily, Supergirl impulsively tackles Byth and carries him off, leaving Ultra alone with the others. J'onn senses that he sees them as a threat, and hopes to show the multi-alien via telepathy that they do not wish to harm him. The child is wary of him, knowing that Byth was a bad man. J'onn promises that he is not Byth, and he will do all he can to help. Sensing his sincerity, the child embraces him.

Sardath realizes that the Zerta Core is too unstable. There is nothing they can do to resolve it, and millions will die if they can't. Sternly, Hawkman orders Sardath to separate the Core so that he can fly it as far from Ranagar as possible. The others try to convince Hawkman not to go through with his plan, but he reminds each of them that they have loved ones and responsibilities. He has no one. All he asks in return for his sacrifice is that they bury him on Thanagar. As he flies off with the core, it begins to overheat, and explodes over Ranagar, leaving the city and its citizens intact.

Meanwhile, Lobo catches up to Byth and runs Supergirl down in a car, allowing the two of them to escape unhindered. With her quarry gone, Supergirl heads instead for the explosion and retrieves, with regret, Hawkman's lifeless body.

Retrieved from "https://heykidscomics.fandom.com/wiki/Justice_League_United_Vol_1_3?oldid=1438595"
Community content is available under CC-BY-SA unless otherwise noted.