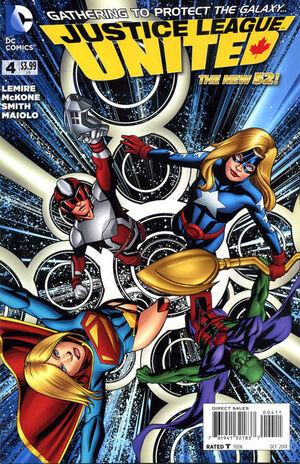 We need to aspire to bigger than that. To align ourselves with any one government -- it'd be too divisive. We need to represent heroes coming together.

Unexpectedly, Alanna Lewis finds herself back on Earth in the abandoned Zeta bunker of the Ultra Project. Hearing a thud from elsewhere in the bunker, she nervously dons one of the space-suits from the wall, and armed with a ray gun, she warns that she's coming for whomever is hiding there. From her hiding spot, young Heather calls for help, explaining that she had watched her friend Miiyahbin taken by some kind of monster. Sympathetically, Alanna offers her help.

Meanwhile, on Rann, Sardath is under fire because of his role in the Ultra Project, breaking the Polaris War Treaty, and costing Thanagar one of its greatest warriors in Katar Hol, who was killed. Sardath reminds that it was Byth Rok, a Thanagarian, who caused this mess. Thorvis of Thanagar insists that Byth Rok was enabled by Sardath, and that Ultra should be destroyed. Martian Manhunter, though, warns that the child is under his protection.

Aside, Animal Man and Green Arrow discuss Hawkman and their relationship to him. Despite being on the JLA with him, Oliver never really knew him well. Uncomfortably, he offers condolences to Buddy for the loss of his son Cliff and apologizes for giving him a hard time as a new member of the team. Accepting the apology, Buddy smirks that they should hug it out. Star Girl and Supergirl, meanwhile, discuss how strange it is to be engaged in battles in space, though Kara reminds that she is an alien to Earth. Somewhat coldly, Kara warns that if Courtney insists on acting the wide-eyed kid, she will be treated as such. She should behave like the member of the Justice League that she is. Alone with Adam Strange, J'onn admits that he feels Hawkman's death is his responsibility. He ordered Hawkman to deal with the Zeta Beam that killed him. Supergirl could have survived it, if she'd been sent instead.

Heather and Alanna search the snowy landscape of Northern Ontario for Miiyahbin until Alanna is distracted by a sound. Instinctively, she turns and, seeing a monster behind them, fires her ray gun. As quickly as it had appeared, the creature is gone. Then again, it returns and a second blast from the ray gun makes it disappear. Heather comments that the thing will surely just keep coming back. Rushing into a nearby cave, they discover Miiyahbin bound to the wall and unconscious.

The Thanagarians take Hawkman's body to their home planet, leaving the Leaguers to determine what they should do with Ultra. J'onn will not allow Sardath to take the boy in, insisting that his telepathic connection is all that keeps his temperament calm. Ultra just has too much power, and he's aging far too quickly. Supergirl remarks that she'd like to go back to Earth now, and Sardath offers portable Zeta-Beam technology to send them all back, but begs J'onn to let him come back and help with Ultra from time to time. Adam, meanwhile, wonders what happened to Alanna. Sardath warns that because of the feedback that occurs when he and Alanna are together, it isn't safe for him to be near his wife until he discovers the cause. Adam will have to stay on Rann.

En route back to Thanagar, Thorvis Thal and his crew discover that they are being chased by Byth and Lobo. Soon, the pair have broken onto their ship and located Hawkman's body. Having got Byth this far, Lobo receives his payment of the location of the imposter who has been impersonating him.

On Earth, Alanna attempts to explain that she needs to get Miiyahbin out of the ice, but the girl seems preoccupied with something else. She comments that she is scared to say the word that she knows may make the monster stalking them go away. Alanna warns Miiyahbin that if she knows a way to save them, she needs to use it now, and reluctantly, Miiyahbin shouts the word "Keewahtin!" transforming instantly into Equinox, and blasting the monster into nothingness. With surprise, Heather realizes that her friend has become a super-hero.

The Leaguers return to the bunker on Earth and worry that Alanna doesn't seem to be present. J'onn reminds that they must find her and tell her about Adam eventually. Courtney wonders if they will all go their separate ways, now that they're home. Buddy admits that the bunker would make a good headquarters. Ollie is less enthusiastic, remembering how the JLA was created merely to battle the other League. J'onn states that if they do stick together, it will have to be for legitimate reasons; reasons of heroism. Selfish agendas should not enter into it. Courtney suggests the name "Justice League United," in keeping with the with the theme of heroes coming together.

Agreed on something at least, the team is interrupted suddenly as Heather and Alanna rush back in with Miiyahbin in her arms, begging for help.

Retrieved from "https://heykidscomics.fandom.com/wiki/Justice_League_United_Vol_1_4?oldid=1438597"
Community content is available under CC-BY-SA unless otherwise noted.