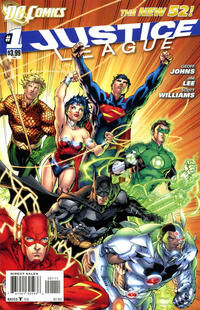 Comics superstars Geoff Johns and Jim Lee make history! In a universe where super heroes are strange and new, Batman has discovered a dark evil that requires him to unite the World Greatest Heroes!

This spectacular debut issue is also offered as a special combo pack edition, polybagged with a redemption code for a digital download of the issue.

Retrieved from "https://heykidscomics.fandom.com/wiki/Justice_League_Vol_2_1?oldid=1660239"
Community content is available under CC-BY-SA unless otherwise noted.