Start a Wiki
Part of the 'Justice League: The Villain's Journey' event 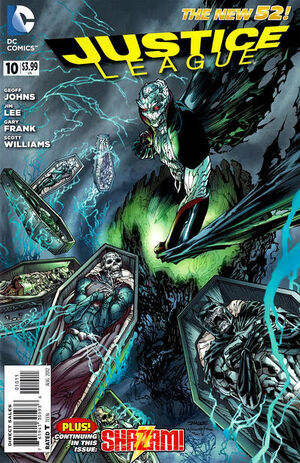 Appearing in "The Villain's Journey, Chapter Two: The Belly of the Beast"Edit

Synopsis for "The Villain's Journey, Chapter Two: The Belly of the Beast"Edit

Foster parents Victor and Rosa Vasquez discuss Billy Batson and the events of last issue. Victor suggests that Billy was doing some play acting when they met him at child services, and that he is showing his true colors now. Rosa defends Billy, suggesting that Billy's encounter with Mr. Bryer has left Billy traumatized. Mr. Bryer is the richest man in Philadelphia, and the father of the four nasty bullies who are bullying Billy's new family at school. Mr. Bryer is a pretty nasty fellow himself, and Billy had the guts to stand up to him. But now Billy has hardly touched his hamburger, and Victor is concerned. Victor expresses frustration, telling Rosa that Billy never gave them a chance.

In fact, Billy is in his room, packing that hamburger in his backpack. He leaves the pickles behind, and sneaks out. Billy heads to a zoo, crawling in through a breach in the brick wall, and feeds the hamburger to Tawny, a tiger that Billy seems to know personally. Freddy tails Billy, but is eventually spotted by him. Billy pushes Freddy, who tumbles down in the snow. Freddy admits he previously lifted Billy's wallet out of curiosity, but did not steal anything.

Billy and Freddy discuss the problem with the Bryer brothers. Freddy reveals that the four bullies have been bothering them daily for quite a while. Freddy usually distracts the bullies so that Mary can help the younger ones get away.

Freddy tries to convince Billy to give Mr. and Mrs. Vasquez a chance. But Billy defiantly says "They aren't my parents."

Freddy thanks Billy for intervening when the bullies were bothering them. They consider heading to the Bryer home to get even.

45 miles north of Baghdad, Dr. Sivana continues the archaeological dig at the Tomb of Black Adam. Aided by his magical right eye, (see last issue), Sivana is now able to read the hieroglyphs. They tell him that he can release Black Adam and bring magic to the world with the utterance of a single word. Sivana quietly speaks the word "Shazam", the magic lightning hits, and a hooded Black Adam stands before him, asking for the Wizard.

Retrieved from "https://heykidscomics.fandom.com/wiki/Justice_League_Vol_2_10?oldid=1660248"
Community content is available under CC-BY-SA unless otherwise noted.