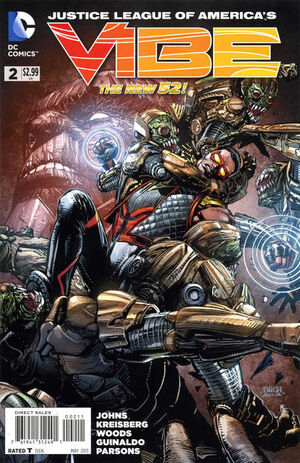 You saved lives today, Cisco... You stopped a war between two worlds. That's why the JLA wants you, but you have to start realizing how dangerous this really is. And how our enemies are everywhere.

Teasing his brother, Dante Ramon suggests that the only reason Ciso was chosen to join the Justice League of America was so that he could be cannon fodder. When he sees the costume Cisco was given, Dante picks it apart, making fun of the prominent orange goggles. Cisco admits that they record everything he sees for data collection, but only when he's on duty. Contrary to that statement, Amanda Waller, who has been monitoring the entire exchange, orders Agent Dale Gunn to have a talk with Cisco about what top secret actually entails.

Suddenly, though, Cisco hears someone crying for help, and rushes out to find that the owner of a local convenience store has been robbed. Rushing after the perpetrator, he uses his powers to knock the thief to the ground, only to find that it is a young kid who stole a bag of chocolate bars. Uncomfortably, Cisco decides to let the kid go, if he returns the candy. Later, he admits with embarrassment that he actually went back to the store, and paid for the kid's candy. In all seriousness, Dante wonders why Cisco was chosen for the JLA if his greatest heroic achievements are nearly saving a Snickers bar from an eigh-year-old. Cisco can't help but wonder, too. Of the thousands of people in America who have metahuman abilities - why him? Hopefully, Dante suggests that maybe, the higher-ups see some potential in Cisco that they don't see. He admits that he is worried, because Cisco is the last brother he's got.

After Dante leaves to pick up their father, Agent Gunn approaches Cisco to explain that using his powers to stop third-graders from stealing chocolate isn't exactly what the government had in mind when they recruited him to the JLA. Among the numerous duties that people like Cisco are required to fulfill for the fate of the world, keeping his identity is one of the smallest of them. Gunn warns that Cisco shouldn't have told his brother about his recruitment, as he may prove an unreliable confidante. Feeling small, Cisco asks why he was chosen. Gunn responds that the power he has is one that no one else has - Cisco just needs to learn how to use it. In the mean time, he sends the boy home, and warns that they are meeting the whole team tomorrow.

Elsewhere, a strange alien being arrives in Detroit, but no one can understand its language. It seems to hold a grudge against A.R.G.U.S.

The next morning, Cisco wonders with his brother about who else might be on the team, thinking that if he knew that, he might be able to figure out why he was chosen to join them. He and Dante are interrupted by their father, which prompts them to quickly hide the screen on Cisco's laptop from him. It's Saturday, and the fact that neither of the brothers has a job - as far as their father knows - leads them to bickering. Suddenly, though, Cisco begins to sense an incursion at the walls of reality, and it is not long before he receives a call from Gunn asking him where that incursion took place.

Just blocks from Cisco's house, the so-called breacher is cornered by a pair of beat cops who are not prepared for the alien's abilities. Gunn and Vibe arrive to late to prevent them from being knocked unconscious, but Vibe does manage to spot the breacher escaping with one of the cops as a hostage. Cisco gives chase, and when he catches up, he uses his abilities to force the bracher into submission. The creature puts up its hands in surrender, and removes its mask to reveal that its mission is one of concern, not destruction. It produces a scroll with a script that Cisco cannot understand, but before it can pass the scroll to Cisco, Gunn appears, and shoots the breacher down. Snatching the scroll from Cisco, Gunn claims that it is a declaration of war.

Later, in the Circus - a government facility where metahumans who are useful to the government but are too unruly or dangerous to recruit are imprisoned - Amanda Waller brings the scroll to Gypsy, as it is her language that is written on it. Gypsy responds that it is a missive from her father, who is asking her to come home. Waller points out that Gypsy is nomadic - she has no home. Coldly, she warns that Gypsy must write a response telling her father not to come for her - unless he wants to be imprisoned as well. Angrily, Gypsy cries out that the government has no right to keep her there. Waller points out that had it not been for her intervention, the Circus would be a slaughterhouse, not a holding facility.

The next day, Cisco is excited to arrive at the JLA headquarters, where he was welcomed and given quarters. Later, the team meets and is presented to the public outside Congress in Washington, D.C. - and Cisco is beyond excited.

In the meantime, Waller orders Gunn to set up an encounter between Cisco and Kid Flash, to see what happens when he comes in contact with the Speed Force.

Retrieved from "https://heykidscomics.fandom.com/wiki/Justice_League_of_America%27s_Vibe_Vol_1_2?oldid=1438524"
Community content is available under CC-BY-SA unless otherwise noted.