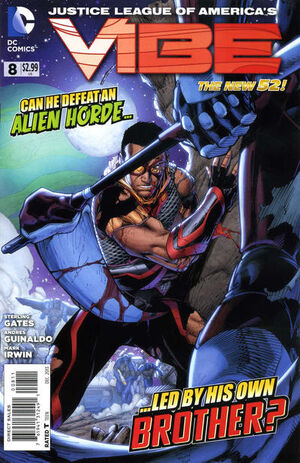 I don't know why you've brought me here, Breacher, but I don't trust you. So you're taking me home--

Appearing in "Other Worlds Than These"Edit

Synopsis for "Other Worlds Than These"Edit

Cisco Ramon's memory is foggy, but he recalls a great battle between people whose culture seems to be based on gemstones, and that battle was for the safety of a beautiful princess: Amethyst, Princess of Gemworld. The princess' friend Ingvie urged Amaya to get back into the castle of House Amethyst, rather than risk exposing herself to danger by fighting. The future of Nilaa, their world, rested solely on Amaya's survival. Unfortunately, Lord Flaw had dictated that there would be no survivors that day. Surprisingly, though, Lord Flaw's "children" of House Quartz all shattered suddenly, and neither Amaya nor Ingvie could say who had done it - until they found Cisco.

Now, Cisco is attempting to remember how he got there. Though his memories are weak, he remembers his brother Armando had returned, and stabbed him in the chest. The result, though, was not his death, but his suddenly being able to see into hundreds of other worlds. He knew that if the energy continued to leak from his body, he would die, so he homed in on the nearest place where anyone might be able to help him - and that took him to Nilaa. Amaya had recognized him, and tried to help him, but touching him sent a violent pulse of energy through her. Suddenly, another traveller appeared on the scene, pointing out that he had warned Cisco about his powers. It was Breacher, who had been searching the multiverse for Cisco. He placed an energy stabilizer over the hole in Cisco's chest, and before long, he was back to normal. Still, the people of Nilaa were angry and suspicious, and Breacher took Cisco away from there, leaving a message to tell Amaya they were sorry.

Now Cisco is in another place with Breacher and his companions. Breacher explains that he was able to track Cisco by his absorbing some of Earth's dimensional radiation from Amaya, who had spent seventeen years of her life there. He hoped to find Cisco because they need his help. Annoyed, Cisco responds that he has other concerns to worry about, like the return of his brother and the kidnapping of his friend Gypsy. Sternly, Breacher has his friends leave the room while he and Cisco talk.

He asks Cisco what he knows about the nature of his powers. Cisco explains that he got them by accident after being caught in one of Darkseid's Boom Tubes. Breacher responds that that is only partially true. The energy that separates dimensions is what powers Vibe's abilities, and when Darkseid breached Earth with his Boom Tubes, he made a tunnel between dimensions. The event horizon of which collapsed on Cisco and his brother Armando, filling their bodies with inter-dimensional energies. The Boom Tubes also weakened the dimensional barriers around the Earth. In fact, it is every time the dimensions are breached that Cisco's power grows stronger. Unfortunately, Armando arrived on Breacher's world fully charged and he was used by Mordeth to take over the planet of Piradell.

Suddenly, Cisco turns on Breacher, warning that he doesn't believe the story about Rupture. He had asked about his family and his friends, and he had been told a story about another world instead. He wants to go home. Vic responds that they can't go back to Earth as there is a dimensional block between Piradell and Earth that can only be fixed by Breacher's daughter. Cisco's anger begins to overload his energy regulator, and Breacher has his friends get their tools to fix it. He warns Cisco that if he cannot keep the energy leak under control, he will end up like him. Removing his helmet, Breacher reveals that his body has been converted entirely into unstable energy, requiring the use of a containment suit. He explains that his daughter is Gypsy, and if they don't get to her soon and keep her away from his wife, Rupture will use her to invade and destroy the Earth.

Retrieved from "https://heykidscomics.fandom.com/wiki/Justice_League_of_America%27s_Vibe_Vol_1_8?oldid=1600211"
Community content is available under CC-BY-SA unless otherwise noted.