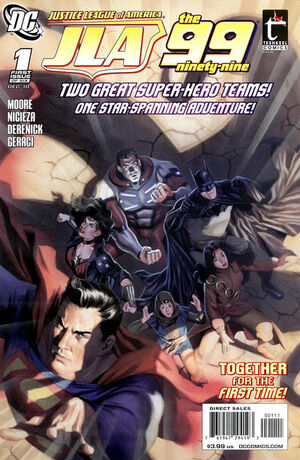 I think I was wrong about the people of this world. They can't live together in peace... So how can outsiders like us possibly help them?

Appearing in "The City of Tomorrow"Edit

Synopsis for "The City of Tomorrow"Edit

During the opening of "the City of Tomorrow" in the Arabian Peninsula, the Justice League of America and The 99 team-up to discover what is causing disastrous earthquakes.

Retrieved from "https://heykidscomics.fandom.com/wiki/Justice_League_of_America_/_the_99_Vol_1_1?oldid=1533545"
Community content is available under CC-BY-SA unless otherwise noted.