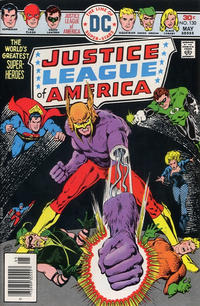 The Dharlu, an alien life-form that had dwelt dormant in a moon rock until unwittingly released by S.T.A.R. scientists, is accidentally teleported up to the satellite at the same time as Flash and Hawkman, resulting in a scrambling, producing antagonistic creatures who are part Flash, part Hawkman, and part Dharlu, which attack the other members.

Thanks to Aquaman sensing the creatures' thoughts during the battle, the heroes are able to divine their purpose, to convert the satellite into a starcraft and return to their homeworld. Trapping the creatures in the teleporter, the JLA is able to restore Hawkman and Flash, but the Dharlu transfers its consciousness into the satellite computer, and sends the satellite streaking toward its own star system, to which the alien must return in order to give birth.

Superman and Green Lantern return the base to its normal position in space, after freezing the Dharlu in suspended animation within the computer.

Retrieved from "https://heykidscomics.fandom.com/wiki/Justice_League_of_America_Vol_1_130?oldid=1438298"
Community content is available under CC-BY-SA unless otherwise noted.