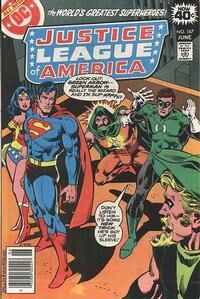 Appearing in "The League that Defeated Itself"Edit

Synopsis for "The League that Defeated Itself"Edit

Reprinted in JLA: The Greatest Stories Ever Told. Hi-Jack's remarks in this about never trusting Funky Flashman and being glad that the Wizard is now leader of the Secret Society are puzzling, as Hi-Jack was actually last seen being banished to another dimension by the Wizard, before Funky Flashman took over as the Society's manager. There is no indication given as to how Hi-Jack returned to Earth or why he is in prison.

Retrieved from "https://heykidscomics.fandom.com/wiki/Justice_League_of_America_Vol_1_167?oldid=1635534"
Community content is available under CC-BY-SA unless otherwise noted.