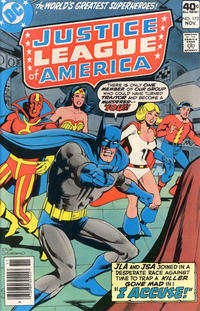 On the cover, Batman is pointing the accusing finger at someone partly off-panel, while Jay Garrick (possessed by the Spirit King) is the real "killer". (The Spirit King actually left Garrick's body to murder Sloane)

Mr. Terrific may have appeared more in the years after his death than in the corresponding number of years before.[1]

Retrieved from "https://heykidscomics.fandom.com/wiki/Justice_League_of_America_Vol_1_172?oldid=1635571"
Community content is available under CC-BY-SA unless otherwise noted.