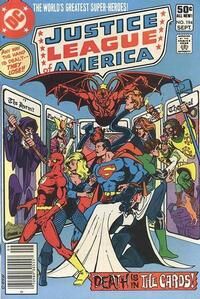 Appearing in "Destiny is a Stacked Deck"Edit

Synopsis for "Destiny is a Stacked Deck"Edit

In the midst of their private lives, several Justice League heroes are confronted in their secret identities by characters from the Tarot. Superman is aged instantly by the Hermit; the Flash becomes a victim of grief for his de-ceased wife at the hands of the Magus; Elongated Man becomes a laughing lunatic after he is affected by the Fool; Green Lantern almost kills himself while flying a jet when he is overcome with love for the High Priestess; Black Canary is filled with senseless anger, following her (and Green Arrow's) encounter with the Charioteer; and Zatanna is blinded in her battle with the Devil. Once Zatanna is able to track the spell giving life to the Tarot creatures, the Justice League easily locates their creator, Prof. Amos Fortune. He unleashes his final card, Death, against them, but they are able to fight off the incarnation of the Grim Reaper, and gradually their normal personalities and abilities are restored. Fortune attempts to escape using his magical cards, but accidentally traps himself in the world of the Tarot deck.

Retrieved from "https://heykidscomics.fandom.com/wiki/Justice_League_of_America_Vol_1_194?oldid=1438369"
Community content is available under CC-BY-SA unless otherwise noted.