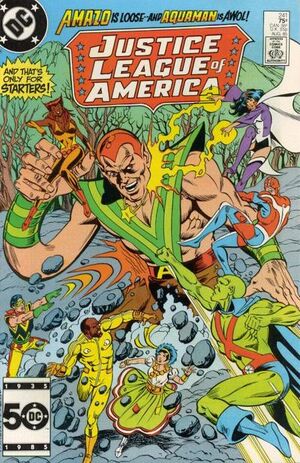 Amazo escapes from Superman's Arctic Fortress of Solitude, and appears in the Yukon town of St. Jude, where he absorbs the being and personality of a bitter former prospector named "Slick" Jake MacGregor. The man's hatred for the town, whose inhabitants he holds responsible for his lack of success, causes him to use his new powers to wipe out all but six of its people. Meanwhile, Aquaman has left Detroit to find Mera, while Hank finally asks Paco if he can date his sister. Vibe adopts a new costume, and J'onn J'onzz brings news of Amazo's northern rampage, whereupon the team departs for the Yukon timberland to seek out the android menace. The Martian Manhunter takes charge in Aquaman's absence and sends the team searching in different directions. He and Dale Gunn are then the first to be attacked by Amazo.

Retrieved from "https://heykidscomics.fandom.com/wiki/Justice_League_of_America_Vol_1_241?oldid=1672466"
Community content is available under CC-BY-SA unless otherwise noted.