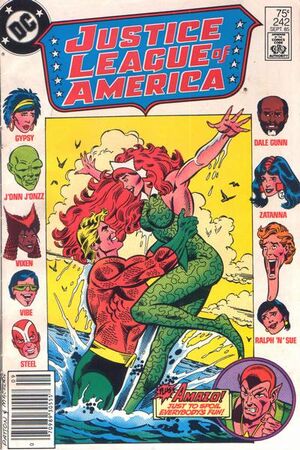 Unaware that Amazo has put J'onzz and Gunn out of action, Elongated Man and Gypsy are caught by surprise as well. Zatanna sees the attack by means of a spell, and she and Steel follow the Justice League signal to their team-mates, as do Vixen and Vibe. Dale Gunn revives J'onn J'onzz, who deduces a means to defeat Amazo, and he and Dale journey to Superman's Fortress. Amazo defeats the four who have come to Ralph and Gypsy's aid, and places them in a deep pit, which he seals with a huge boulder. Meanwhile, Aquaman and Mera are reunited in the ocean depths.

Retrieved from "https://heykidscomics.fandom.com/wiki/Justice_League_of_America_Vol_1_242?oldid=1672467"
Community content is available under CC-BY-SA unless otherwise noted.