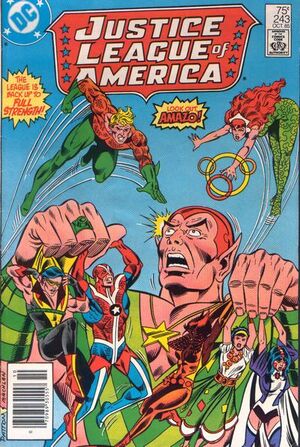 Aquaman and Mera arrive at the bunker headquarters to discover their friends gone and a map of Canada their only clue to the team's whereabouts. As Vixen overcomes her claustrophobia to help her team-mates escape the pit trap, J'onn J'onzz and Dale Gunn visit Superman's Fortress of Solitude and find that a meteor was responsible for freeing the android. Aquaman and Mera find the now-freed members and administer first aid aboard the L.O.S.T. while they trail Amazo toward Vancouver. J'onzz and Gunn head for St. Jude to discover who Amazo had absorbed in order to determine his motivation, and thus they learn of Jake Mac-Gregor's vendetta against those whom he felt had cheated him. In Vancouver, Aquaman and Vixen attack the android, but neither can resist all the powers of the original Justice League members at once. Steel prevents Amazo from killing them. Amazo is then suddenly confronted by himself in the form of Jake MacGregor, who is actually J'onn J'onzz in disguise. The android's confusion allows Aquaman to defeat him, and Amazo shuts down once again. Aquaman has decided that his marriage is more important to him than the Justice League, and offers his resignation. Meanwhile, Steel's grandfather Hank Heywood, having discovered that Dale Gunn has changed the locks on the Bunker, and feeling that the new Justice League is not a fit group for his grandson, decides to come out of retirement as Commander Steel to change the situation.

Retrieved from "https://heykidscomics.fandom.com/wiki/Justice_League_of_America_Vol_1_243?oldid=1672468"
Community content is available under CC-BY-SA unless otherwise noted.