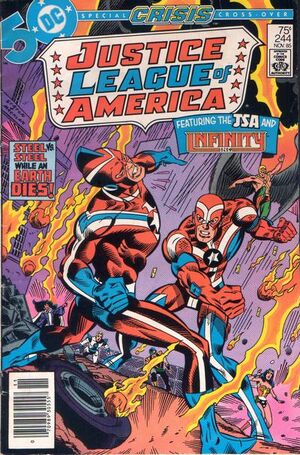 Appearing in "The Final Crisis"Edit

Synopsis for "The Final Crisis"Edit

Commander Steel has activated the long-dormant Mekanique, and utilizing the mechanism's ability to traverse dimensions, travels to Earth-Two and enlists Infinity, Inc. to battle the new Justice League, taking advantage of their ignorance of the recent turnover in JLA membership. Meanwhile, the red skies of the Crisis begin to appear on both Earths.

The Infinity team quickly overcomes the new League at their Detroit headquarters, but J'onn J'onzz is able to ferry his unconscious comrades away, and the Infinitors, still not sure that they are fighting villains, follow. The Justice League members are recovering in the shell of their former satellite headquarters, while Infinity search-es the Bunker for clues to their location, and again suspects that their adversaries may not be villainous, especially when they discover Steel on his grandfather's operating table, being tortured by Mekanique.

In the satellite, Zatanna recharges the vehicle's power supply, so that the team can travel to Earth-Two via the Trans-Matter machine to en-list the help of the Justice Society. Commander Steel candidly admits that he has used Infinity for his own ends, and Mekanique renders them all unconscious, just as the Justice League and Justice Society arrive at the Bunker.

The elder Heywood reveals that he had created his grandson's Steel identity to make up for the loss of his own son in Viet Nam, a death he blamed on his son's mortal weakness. The Justice Society overhears this confession and attacks, battling Mekanique, while Commander Steel tries to get to Hank. As he and Steel square off, the robot disappears, and Dr. Fate senses the growing storms of the Crisis. The combined Earth-One and Earth-Two teams go outside to help the people of Detroit, while Steel decisively defeats his grandfather.

Retrieved from "https://heykidscomics.fandom.com/wiki/Justice_League_of_America_Vol_1_244?oldid=1672469"
Community content is available under CC-BY-SA unless otherwise noted.