Part of the 'Crisis on Infinite Earths' event 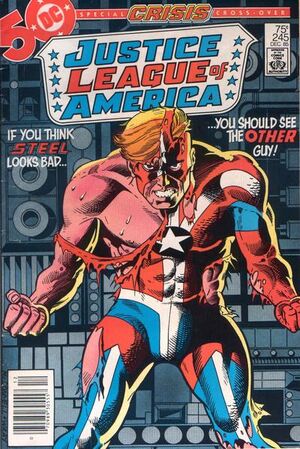 Warp, a member of the Brotherhood of Evil, sends Steel through time into the far future, where he is immediately attacked by giant in-sects and killer robots. He is helped to safety by a woman named Olanda, who explains that he is now in the year 1,000,000,000 A.D., and that his attackers are directed by someone called the Six. She mistrusts him when he tells her that he is part of the Justice League. The Six are her brothers, and they are out to kill their father with his own main weapon, the Chrono-Cube. Her father then reveals himself as the Lord of Time, now very old. He tells Steel that he had come to this far future as a refugee. He had cloned himself to create his seven children, but had also created resentment by favoring Olanda. The six sons rebelled against him, stole his Chrono-Cube, amassed Killer-bots from the past, and attacked him. The Six, meanwhile, are slowed by having to reach a consensus on everything, and Steel attacks them and their robots, allowing the Lord of Time and Olanda to reach the Cube. In the blink of an eye, all around him disappears, and Steel watches the Cube reappear. The Lord of Time has gone back in time and prevented his younger self from creating his "sons." Olanda, however, still lives, and before returning to his own time, Steel asks for some time alone with her.

Retrieved from "https://heykidscomics.fandom.com/wiki/Justice_League_of_America_Vol_1_245?oldid=1672470"
Community content is available under CC-BY-SA unless otherwise noted.