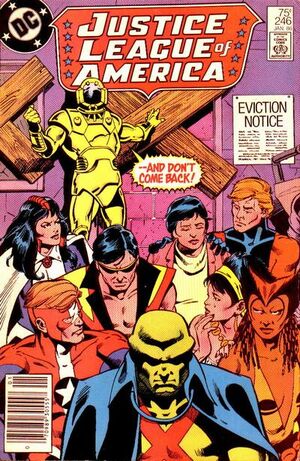 Appearing in "Be It Ever So Humble"Edit

Synopsis for "Be It Ever So Humble"Edit

Despite his remorse for what he has done to Steel, the elder Hank Heywood evicts the Justice League from the Bunker, something Steel refuses to accept. He breaks in and confronts his grandfather, who apologizes for trying to live his life through him. Heywood tells his grandson that the break with his influence must be total. Steel reconciles with him, and the Justice League bids Detroit farewell. Since Vixen and Zatanna have apartments in New York City, the team heads there, and new lives are begun. Elongated Man and Sue move into her cousin's house in Westchester, J'onn J'onzz revives his John Jones identity to rejoin the police force, and Steel and Vibe look for apartments and employment on their own. John Jones is rejected for being past the retirement age according to the police computer, but a private detective named Burt Biloxi invites him to join his agency, and John accepts. Hank gets a job instructing weight-lifting at the Workplace, a body-building gym. Zatanna returns to her sublet apartment to learn that her roommate is nowhere to be found. Paco discovers that rent is very high in New York.

Retrieved from "https://heykidscomics.fandom.com/wiki/Justice_League_of_America_Vol_1_246?oldid=1674817"
Community content is available under CC-BY-SA unless otherwise noted.