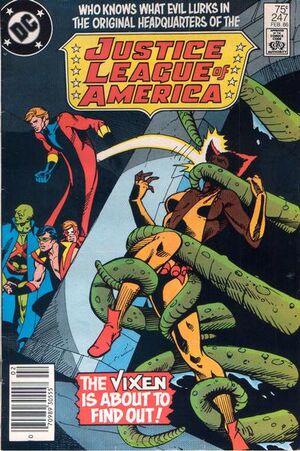 Without their satellite or the Bunker, the Justice League decides to return to their cavern Secret Sanctuary, and find it a bit dusty, but in good condition, following its occupation by the Injustice Gang (in issue #158). Manhunter, Steel, Zatanna, and Vibe leave to deal with prior appointments, while Elongated Man, Vixen, and Gypsy are left to clean. At the gym, Hank considers an offer to become a movie stuntman, while Zatanna searches for her roommate Sheri, and Vibe, a technophobe, is dismayed to discover that the Transporter Tubes used to travel to the satellite will be re-configured to transport them to the Sanctuary. In the headquarters, Gypsy discovers a family of opossums living in the shadows, while Vixen's senses lead her to another resident of the cavern, a huge amorphous alien creature, which covers her with a black aura and leaves her and Ralph unconscious. Gypsy eludes the creature, but when it threatens the opossums and she pushes it over easily, she senses that it is only a baby. Meanwhile, a shadowy figure escapes from the prison planet Takron-Galtos, killing three guards in the process.

Retrieved from "https://heykidscomics.fandom.com/wiki/Justice_League_of_America_Vol_1_247?oldid=1672488"
Community content is available under CC-BY-SA unless otherwise noted.