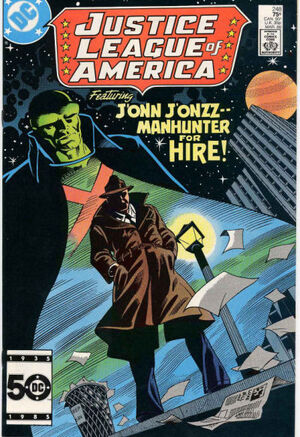 While Elongated Man, Vixen, and Gypsy discuss the alien, J'onn J'onzz is engaged in a stakeout as John Jones, waiting outside an apartment for a runaway named Pamela Cross. He hears a scream, dashes inside the building, and discovers a woman's body, the murder gun beside her. As he notes that she is not Cross, he picks up the gun, just as the police enter and arrest him. He escapes invisibly, taking the weapon with him. Zatanna finds a pile of ashes in her apartment and fears that they may be the remains of her friend, before finding a note which leads her to the Westside Marina. Vibe moves to a run-down apartment, and battles local protection extortionists. Steel loses his temper while working in the movie studio's barbarian film production, and loses his job but gains the phone number of the script-continuity girl. Back at the Sanctuary, the alien being, which Gypsy dubs Junior, tries to run away when Vixen suggests taking tissue samples, but it is halted outside by the arrival of Martian Manhunter, Steel, and Vibe. The three are hit with its black aura before Steel knocks the creature unconscious. It appears that all is well, until Vixen staggers in, having been aged decades. Out in space, the prison-escapee arrives on the planet Kalanor, where he is worshiped as a god.

Retrieved from "https://heykidscomics.fandom.com/wiki/Justice_League_of_America_Vol_1_248?oldid=1672473"
Community content is available under CC-BY-SA unless otherwise noted.