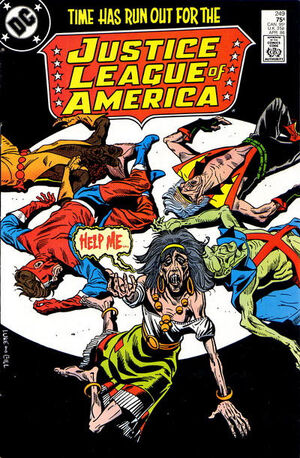 Appearing in "All Fall Down!"Edit

Synopsis for "All Fall Down!"Edit

Vixen is taken to sick bay, while Gypsy tries to bring Junior back inside the cavern. Steel objects and is again hit with the black aura, and Vibe's shockwave seals Gypsy and Junior outside with him, and Steel inside. As J'onn J'onzz examines Vixen, Elongated Man also shows signs of the aging effect, and the Martian Manhunter makes the connection between the aging and the alien. In Greenwich Village, Zatanna visits a voodoo expert, and learns that the ashes are graveyard dust, not human remains. Sue Dibny drives to the Sanctuary to show her husband the new costume she had designed, and encounters Gypsy and the alien. Just then, Steel and Vibe find them and discover that Gypsy has begun to age horribly, too. J'onn J'onzz analyzes a tissue sample from Junior, and the computer reveals that the alien was grown from a spore brought to the headquarters years before on Super-man's cape, that it is a non-sentient form of plant life, and it is and has been absorbing the lifeforms of animals in its vicinity. He begins to age just as he tries to trigger the League's emergency signal to alert all members, past and present. Vibe, Steel, and Sue enter with Gypsy, to find Ralph also near death; then Vibe and Steel are again at-tacked by Junior, and they too age. Sue watches the alien change to human form, and manages to trigger the alert before passing out. On Kalanor, Despero enters the Flame of Py'tar to achieve supreme wisdom and power.

Retrieved from "https://heykidscomics.fandom.com/wiki/Justice_League_of_America_Vol_1_249?oldid=1672474"
Community content is available under CC-BY-SA unless otherwise noted.