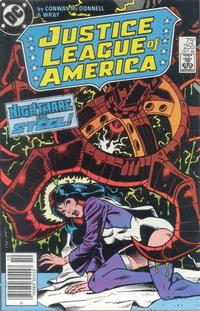 Zatanna is brought out of her drugged delirium by the voice of her late father Zatara, and she escapes her bonds to face Adam. The injection of her genetic pattern has caused him to gain an expanded consciousness, and he pro-claims himself God. He observes the Justice League in their headquarters as they answer the team alert she had sent, while Hank Heywood is ministered to by Sue Dibny, and J'onn J'onzz and Gypsy are seeking runaway Pamela Cross. Gypsy finds Pamela and learns her story, by telling how she had run away herself because of her father's alcoholism, constant arguing, and the first demonstration of her illusion power. She had lived in the streets until finding the justice League, whom she looked upon as her salvation. John Jones meanwhile has traced the murder weapon from his case to Burt Biloxi's office, and deduces its theft by Biloxi's secretary, Norma Simons. When he confronts her, she blames the murder on her lover, who had used her to kill his wife. The man shoots Jones, but only the room's open fire prevents the disguised Martian from following them as they flee. The Justice League reaches Adam's headquarters, but Zatanna greets them outside and dismisses her call as a false alarm. This, however, is merely an illusion caused by Adam, who actually still holds Zatanna captive.

Retrieved from "https://heykidscomics.fandom.com/wiki/Justice_League_of_America_Vol_1_255?oldid=1674821"
Community content is available under CC-BY-SA unless otherwise noted.