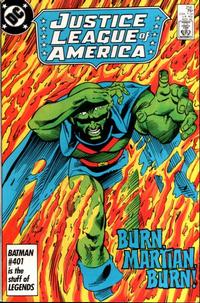 Appearing in "Back to Godhead"Edit

Synopsis for "Back to Godhead"Edit

J'onn J'onzz and Gypsy, along with Pamela Cross, are drawn to Zatanna by mystic hallucinations created in her delirium. When J'onn revives her, she reveals Adam's machinations to them, and they find themselves awash in a sea of his illusions. Adam approaches them, begging for help. The Martian Manhunter telepathically discovers that the expansion of his consciousness has created such a feeling of inadequacy in Adam that he is now in danger of losing whatever link he still has with reality. Zatanna at first debates whether she should help the man who had tortured her, but both the Manhunter and Gypsy convince her to try. She conjures a spell which allows her and Gypsy to enter Adam's consciousness, with Manhunter psychically calming him and maintaining a link with the real world. Suddenly, Zatanna and Gypsy are attacked by demons, and the link is broken.

Retrieved from "https://heykidscomics.fandom.com/wiki/Justice_League_of_America_Vol_1_256?oldid=1672476"
Community content is available under CC-BY-SA unless otherwise noted.