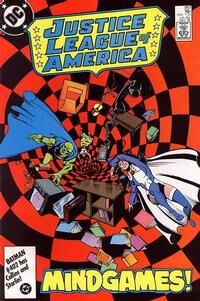 Zatanna rescues Gypsy from Adam's mind-demons and mystically casts her back to reality. However, Zatanna is still caught inside Adam's mind, until her father reaches to her again from beyond and brings her to her senses. From outside, Gypsy uses her illusion power to balance the chaos in Adam's mind, but Zatanna nearly succumbs until Zatara brings her to Adam's ego and the "Godhead," the collective consciousness of all beings, living and dead, where Zatara now exists. Zatanna allows herself to be drawn in and is then rejected by the Godhead. Zatanna is now forever changed, she tells her fellow members. Having learned the cosmic plan, she and the similarly-affected Adam decide to share their destiny together, and the pair disappears in a mystic flash. Back at headquarters, Manhunter and Gypsy discuss Zatanna's transformation with Elongated Man, Vixen, Steel, and Vibe, but they are interrupted by the appearance of Firestorm, who requests their aid to battle a menace called Brimstone.

Retrieved from "https://heykidscomics.fandom.com/wiki/Justice_League_of_America_Vol_1_257?oldid=1674822"
Community content is available under CC-BY-SA unless otherwise noted.