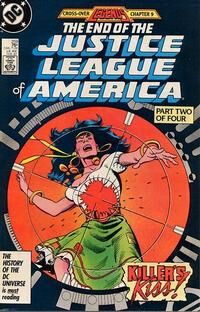 Vibe is dead, his body lying on a sidewalk in the South Bronx. The Justice League of America respond to his distress call, and are horrified to find his corpse. Vixen scares away a gawker. Martian Manhunter pulls a mask off of Vibe's face, and recognizes that it belongs to Professor Ivo. The NYPD roll up and tell them to step away from the body. Vixen calls the police mindless hunters who kill without thinking, and she attacks them. Steel is so angry that he destroys the police car. They decide to leave before they attract more trouble.

Professor Ivo watches all this far away on a computer monitor. His only regret is that nothing, not even death, is suitable punishment for what he believes the League did to him. Ivo visits his android psychiatrist for another session. The psychiatrist tells him that what he's doing is wrong, and Ivo angrily shuts it off. Ivo decides that the youngest member, Gypsy, will be his next target. He sends another android.

Gypsy is at the home of Pamela Cross, another runaway she made friends with. Pamela is nervous about seeing her parents again, but Gypsy assures her they will be very happy. The Cross parents are thrilled, and Gypsy uses her invisibility to slip out while they are embracing. Pamela rushes to introduce her parents to Gypsy, her best friend, but Gypsy has already disappeared. Gypsy walks along the highway trying to hitchhike. Eventually she is picked up by Ivo's android in a car. Gypsy notices that he seems strange, but believes she can handle herself.

Back in the Justice League Bunker, they place Vibe's body in a cryogenic chamber to preserve him. Vixen demands to know who Professor Ivo is. Martian Manhunter explains that Ivo fought the original League, and blames them for the horrible deformity he inflicted upon himself. Despite his anger, Martian Manhunter tells the team that they will stand down. They cannot pursue justice until Ronald Reagan rescinds the presidential edict making superhero activity illegal. Martian Manhunter flies away, leaving Steel and Vixen alone.

The android apologizes to Gypsy, and blasts her with an energy beam. This shoots her out of the car. Gypsy tries to use her powers to hide, but the android's advanced sensors are able to find her. The android hunts her down as she runs barefoot in the woods. Ivo watches on his computer monitor. The video feed cuts out suddenly and then turns back on. Gypsy is lying dead on the ground, with an Ivo mask over her face. Professor Ivo is delighted at first, and then he regrets killing a woman so young. When Ivo has stopped paying attention, the android wakes Gypsy. It is revealed that the android faked her death, and they fooled the video monitor with her illusion powers. The android explains that his consciouss is directly linked to Ivo, and part of Ivo didn't want her to die. Unlike the fallible human Ivo, his android counterpart had the strength not to kill her. The android drives her the rest of the way home. Gypsy returns to her father Edward, her mother June, and her brother Evan. The family embraces her with tears in their eyes. Outside, the android watches this reunion. Martian Manhunter arrives and taps the android on the back.