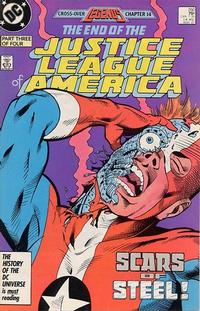 Steel and Vixen try to relax in Vixen's apartment. Steel is furious that they cannot act because President Reagan made superheroes illegal. He blames this on G. Gordon Godfrey, who stirred up anti-hero sentiment. Vixen tries to stop him, but he insists on returning to the streets as Steel.

Professor Ivo argues with the android psychiatrist he created again. He yells that the Justice League are killing his children, and the psychiatrist disagrees with him. Ivo yells that he is not insane. The psychiatrist says that Ivo has lost control, and suggests they talk about Ivo's mother. It is revealed that the real Professor Ivo is somewhere else, locked in a padded cell wearing a straitjacket.

Steel walks down the street, and receives angry stares. The civilians begin yelling at him, and somebody calls the police. The NYPD arrive and threaten to shoot Steel unless he gives himself up. Steel reminds them that the Justice League have fought and bled for the people of Earth, saving them countless times. Suddenly he recognizes that one of the police officers is an Ivo android. Steel begins viciously attacking this android, and everyone assumes he is attacking a cop. The crowd yells at him, and he drags the android into an alleyway. The android explains that he was specially designed to destroy Steel, and attacks with energy blasts. These tear away at Steel's metallic skin, and the android berates Steel for being a soul-less robot. Steel stumbles out of the alleyway with half of his face destroyed, and the android shoots him in the back. The police and civilians stand back as Steel bravely fights for his life. The android continues to blast Steel, and Steel struggles through the beam. Finally the android reaches critical mass, and explodes. Steel contains the explosion with his body, proving to the crowd that he is a true hero. This leaves his body almost completely destroyed, and he writhes on the ground as a robotic skeleton. Martian Manhunter arrives to help. The police tell him that he cannot touch Steel's body, but Martian Manhunter doesn't listen and carries him away. Steel is brought to Detroit, where his grandfather Hank Heywood can examine the body. Heywood blames himself for what happened to Steel. Martian Manhunter tells him that he only prolonged his grandson's life, who would have died years ago anyway. Steel is hooked up to a life-support machine, but the damage is too severe to fully repair him. Heywood regretfully pulls the plug on Steel, and his heartbeat goes flat. Martian Manhunter walks out of the room with his head in his hands. In the padded room, the real Professor Ivo says "I'm sorry" but nobody else is there.

Retrieved from "https://heykidscomics.fandom.com/wiki/Justice_League_of_America_Vol_1_260?oldid=1672482"
Community content is available under CC-BY-SA unless otherwise noted.