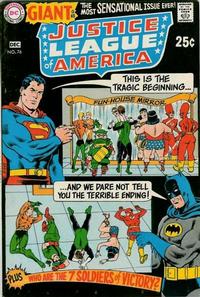 Appearing in "The Cosmic Fun-House!"Edit

Synopsis for "The Cosmic Fun-House!"Edit

Synopsis for "The Last Case of the Justice League!"Edit

Having been banished to Batman's intended world, Superman is able to get away and rescue the others and bring them back to Earth. There they save Snapper and split up to capture Dr. Light. However, each group finds that they have only caught light duplicates of Dr. Light. However, Green Lantern manages to find the real Dr. Light by using his power ring to make it look as though he was destroyed by Light so that he could track and find the real Dr. Light and capture him. Afterwards, Snapper decides to keep the case titled "The Last Case of the Justice League!" because the date which Dr. Light had chosen to attack the League was April 1st, April Fool's Day.

Appearing in "The Seven Soldiers of Victory"Edit

Synopsis for "The Seven Soldiers of Victory"Edit

Retrieved from "https://heykidscomics.fandom.com/wiki/Justice_League_of_America_Vol_1_76?oldid=1636082"
Community content is available under CC-BY-SA unless otherwise noted.