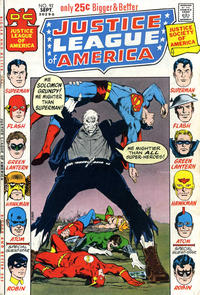 Appearing in "Solomon Grundy - The One And Only"Edit

Synopsis for "Solomon Grundy - The One And Only"Edit

Synopsis for "The One-Man Justice League!"Edit

reprinted from Mystery in Space Vol 1 29

The Neal Adams designed costume worn by Robin of Earth-One in this issue could have been a permanent change; readers were asked to write in with their views on the matter. Instead, however, a slightly different version of this look (with a full cape rather than underarm glider wings) was eventually adopted by Robin of Earth-Two in the revived 1970s incarnation of All-Star Comics. Robin of Earth-One retained his original costume until the early 1980s.

Retrieved from "https://heykidscomics.fandom.com/wiki/Justice_League_of_America_Vol_1_92?oldid=1636088"
Community content is available under CC-BY-SA unless otherwise noted.