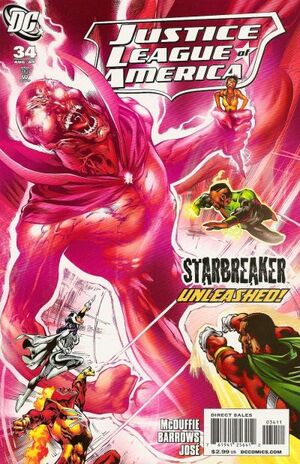 Appearing in "Welcome to Sundown Town, Conclusion: The Dharma Initiative"Edit

Synopsis for "Welcome to Sundown Town, Conclusion: The Dharma Initiative"Edit

The League continues their battle with Starbreaker and the team is shocked when the villain grows to a monstrous size. Zatanna throws everything she has at the cosmic vampire and only manages to stun him. Meanwhile the Shadow Thief cuts Dr. Light from behind as John tries to contact her. Firestorm wakes up and tells John that he is going to kill the Shadow Thief when he sees him. Hardware talks him down and Firestorm comes on to the scene where the Thief has Dr. Light in a ball made of shadow. Dr. Light breaks free and she makes short work of the Shadow Thief. The team reunites outside and as Starbreaker breaks free from the ground Firestorm and Dr. Light attack. The rest of the League joins the battle but Starbreaker takes them all down even in his weakened state. Paladin shoots Starbreaker with a bullet made of Lutetium and a gun that is effectively a rail gun. Zatanna heals Dharma, who suggests they take special care in disposing of Starbreaker's corpse.

Later Dharma meets with Icon who then contacts Superman so they can both hear Dharma's "confession". During the "Final Crisis" the death of a god ripped the fabric of space time, which released forces that destroyed where Icon and the others resided. Not long before the end Dharma tapped the source of an unfathomable power called The Rift. Superman remembers something about Icon being from another universe and that he teamed up with Icon and others to beat Rift and restore both universes. This doesn't make sense to Superman since he and Icon have known each other for years. Dharma continues his explanation by telling Superman that he tapped into Rift's power to merge the two universes in addition to altering the memories and histories of both but only enough to smooth out any inconsistencies. Currently Dharma holds the merger together with Rift's power and his own will but after foreseeing Starbreaker's attack and realizing he didn't have the power to deal with both the merger and the vampire he set in motion the events that led them to where they currently were. He leaves the final decision whether or not to keep both realities together to Icon, who agrees, as does Superman and the three form a pact to keep the merger a secret in addition to keeping the world safe while Dharma keeps it all together.

Retrieved from "https://heykidscomics.fandom.com/wiki/Justice_League_of_America_Vol_2_34?oldid=1438472"
Community content is available under CC-BY-SA unless otherwise noted.