Start a Wiki
Part of the 'Reign of Doomsday' event 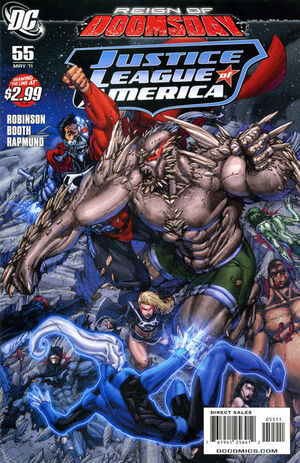 The Spectre has fallen and darkness spread throughout the Universe, no one is safe from Eclipso's control! Not any of shadow-based heroes and villains. Not Alan Scott and the magical beings of the moon's Emerald City. Not even the World's Greatest Heroes! And when Eclipso's ultimate goal is revealed, they'll see that it's scale is even bigger than the Universe. One lone hero has the power to make sure all be well however, for he has hope, Blue Lantern Saint Walker. In the remains of New Krypton, Doomsday tears through Batman, Supergirl and Boodikka in his search for Cyborg Superman.

Retrieved from "https://heykidscomics.fandom.com/wiki/Justice_League_of_America_Vol_2_55?oldid=1673419"
Community content is available under CC-BY-SA unless otherwise noted.