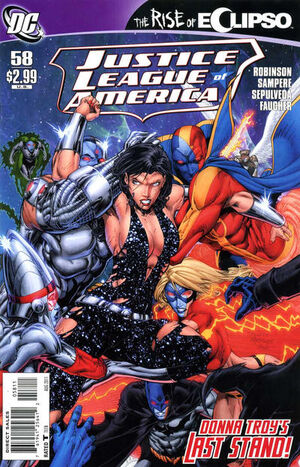 Appearing in "Eclipso Rising, Part Five: The Destined and the Dying"Edit

After last issue's devastating battle with the Spectre, Eclipso now has the power to split the moon in two, an omen that the end of days has begun. With life on Earth at stake, Batman much hatch a desperate plan involving Shade, Starman and the Atom. At the same time, another member of the team steps forward, not knowing how vital she is to mankind's survival. Prepare for "Eclipso vs. Donna Troy" – with an ending that will shock you!

Retrieved from "https://heykidscomics.fandom.com/wiki/Justice_League_of_America_Vol_2_58?oldid=1714600"
Community content is available under CC-BY-SA unless otherwise noted.