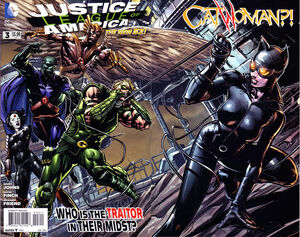 Appearing in "World's Most Dangerous, Chapter Three: The Forest and the Trees"Edit

Synopsis for "World's Most Dangerous, Chapter Three: The Forest and the Trees"Edit

Despite giving off the appearance of having kept his mental probe of Catwoman light, he went far deeper than his team mates know. He has seen that she is a woman who has lost everything, including her childhood, her hope, and her identity. He sees how she fills those gaps in her life with witticisms, and hides what she cannot fill beneath her mask. Unfortunately, masks can double as blindfolds.

Catwoman, meanwhile, is able to see into his mind just as he is into hers - but she senses that he doesn't know that she can see it all. She sees him in the past, hunting a bizarre and dangerous martian creature. In the process of killing the creature, he takes its memories, so that it can live on in him. As she is about to watch him return to his home, the connection is severed.

He apologizes for intruding in her mind, speaking telepathically. She asks him not to do that again, thinking to him that no matter what he saw in her head, his own demons are haunting him, too.

Retrieved from "https://heykidscomics.fandom.com/wiki/Justice_League_of_America_Vol_3_3?oldid=1660313"
Community content is available under CC-BY-SA unless otherwise noted.