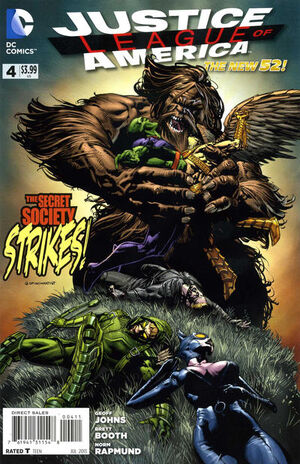 Appearing in "World's Most Dangerous, Chapter Four: The Good, The Bad, and The Shaggy"Edit

Synopsis for "World's Most Dangerous, Chapter Four: The Good, The Bad, and The Shaggy"Edit

Synopsis for "Trial By Fire"Edit

In combat with the Shaggy Man, Martian Manhunter is faced with his greatest fear - fire. Though his body is invulnerable, even to flames, his psyche is not at all. However, it was not always that way.

Long ago, he had completed the Test of State - killing the most deadly beast on Phobos - and was set to return to Mars as the leader of his people. The old leader was dying, but his memories would be recorded and collected; passed on to the next leader.

The people of Mars were all connected by their telepathic collective consciousness, but in order to perform The Test of State, J'onn had had to disconnect himself from it, temporarily. Unfortunately, upon his return to Mars, he found that he would never feel that connection again.

In his absence, Mars had been burned and destroyed, with no lives spared. Though the memories of his predecessor would not be passed on to him, one alien concept was imprinted upon him that day: Man. He had never heard the word before, but he knew that man was responsible.

The reason that fire hurts J'onn now is guilt. He feels that he should not have survived where all of his people had died. He should never have been the last Martian.

Retrieved from "https://heykidscomics.fandom.com/wiki/Justice_League_of_America_Vol_3_4?oldid=1660314"
Community content is available under CC-BY-SA unless otherwise noted.