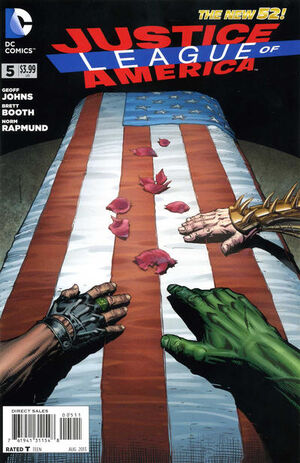 Synopsis for "The Martian Manhunter"Edit

Having sensed Catwoman's attempt to escape her cell in the Secret Society's manor, Martian Manhunter assumes her identity thanks to the mind-scan he took of her, in order to spare her the punishments she will undoubtedly face when she is caught. While he waits for that punishment to come, he thinks back on his horror at returning to Mars to find his people massacred. Desperately, he had scanned the ether for any trace of thought, and all he had found were the words "Thoth" and "Earth". The one responsible for the death of his people was calling to him.

He found the creature in Egypt, and it readily admitted that it had called him because it felt alone in the world, as one of the only creatures who could talk through his mind. Thoth is surprised and upset to learn that J'onn is blocking him from connecting with his mind. J'onn explains that this is because Thoth's thoughts are toxic. His people are dead because Thoth reached out with thoughts that behaved like a virus, consuming the thoughts and the lives of those they touched. Filled with rage at the loss, J'onn attacks brutally, intending to take Thoth's life. But as he attempted to kill the man, he learned of his life. The boy had grown up thinking thoughts that were incompatible with the human minds of others. He had killed his friends and family by thinking at them alone. He searched and searched for like minds, unaware that the people of Mars would die too.

When J'onn killed Thoth, he learned, to his horror, that Thoth was not a mortal man as he had thought. Thoth was a parasite. He could inhabit any body, and continue spreading his viral thoughts. And Thoth had just made a mortal enemy in him.

Retrieved from "https://heykidscomics.fandom.com/wiki/Justice_League_of_America_Vol_3_5?oldid=1660315"
Community content is available under CC-BY-SA unless otherwise noted.