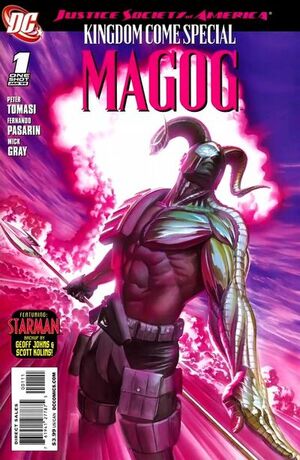 Honor and loyalty shine bright in this weary world. Godspeed.

Appearing in "Magog: The Real Me"Edit

Synopsis for "Magog: The Real Me"Edit

While following the trail of Gog through the Congo, his new herald, Lance Corporal David Reid, aka Magog, learns that members of his former military unit are engaged in combat with Congolese militants. He parts company with the JSA in an effort to rescue his men. Witnessing the brutality wrought by the enemy, he slaughters the Congolese soldiers and leaves the wounded, wallowing in a shallow grave.

Appearing in "The Secret Origin of Starman"Edit

Synopsis for "The Secret Origin of Starman"Edit

After Starman recovered his sanity he remembers his mission in the present, he travels to Sunshine Sanitarium to explain the doctors he is already sane and he tells them his secret origin, then he asks for a recomendation letter in order to get a job.

Retrieved from "https://heykidscomics.fandom.com/wiki/Justice_Society_of_America_Kingdom_Come_Special_Magog_Vol_1_1?oldid=1438754"
Community content is available under CC-BY-SA unless otherwise noted.