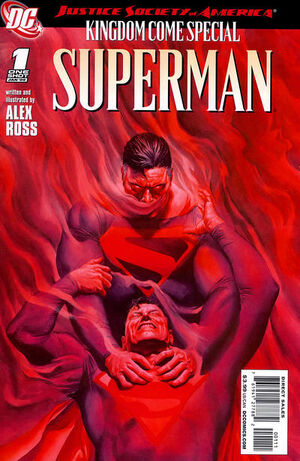 Being haunted by my past has made me ever vigilant in this world. I try not to relive my memories... or repeat my failures.

Kal-El of Earth-22 is at JSA Headquarters contemplating his past. After having a discussion with Cyclone, he decides to go to Metropolis to see this reality's Lois Lane. Upon arriving however, he finds a group of terrorists attacking the Daily Planet with Kryptonite gas. Kryptonite from this reality doesn't work on Kal-El and he easily defeats the criminals, albeit with great recklessness. Superman shows up and the two have a brief altercation with one another.

Later, Kal-El learns that a version of Norman McCay from his reality, also exists on this one. He flies to McCay's church in Chicago, Illinois and has a talk with the elderly, retired reverend. McCay gives Kal-El hope for the future.

He returns to JSA headquarters whereupon he meets visitor Lois Lane. Lois wants to know how her Earth-22 counterpart died and Kal-El recalls the haunting memory of when the Joker brutally murdered her on his world.

Retrieved from "https://heykidscomics.fandom.com/wiki/Justice_Society_of_America_Kingdom_Come_Special_Superman_Vol_1_1?oldid=1438755"
Community content is available under CC-BY-SA unless otherwise noted.