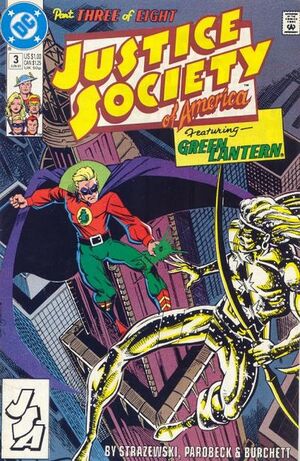 Alan Scott goes on the air to explain the power outages when the power goes out again despite the staff's best efforts. A bright light outside the window attracts their attention and they see the giant figure of Sagittarius blissfully absorbing their station's energy. Alan changes to Green Lantern to investigate while the crew rush outside to film the being. After Green Lantern stirs the seemingly sleeping creature it attacks him and the two begin to fight. The crew meanwhile pass the henchmen and their prisoner, the unconscious Black Canary, with barely a second glance until Solomon Grundy, who spotted his enemy, wanders into the crew. The lead henchman calls the master villain (revealed visually to be Vandal Savage) to tell them that, not only did they steal the Egyptian artifacts from the museum (during the last issue), but they managed to capture Black Canary - a development Vandal is pleased about. Vandal has allowed the GBC camera crew's feed to be broadcast so he can watch the Green Lantern's fight. He orders the henchmen to bring the Green Lantern with them, once he has been defeated by Sagittarius. Vandal hangs up and gloats to Ted Knight, claiming it was only advanced technology that allowed the JSA (and the Allies) to defeat him (and the Axis) during WWII. That is the reason Vandal has summoned the constellation beings, to absorb all the new, technological energies (electricity, radio broadcasts, etc.) to return the world to a more primitive state and make it easier for Vandal to take charge.

Green Lantern, meanwhile, is making some progress fighting Sagittarius who transforms into a giant eagle. During the battle the GBC crew's equipment is destroyed but GL manages to cage the bird. Solomon Grundy grabs a telephone booth and hurls it at GL, knocking him unconscious and freeing Sagittarius who plucks GL, Black Canary and the Egyptian loot in its eagle claws before Grundy can kill them.

Retrieved from "https://heykidscomics.fandom.com/wiki/Justice_Society_of_America_Vol_1_3?oldid=1438759"
Community content is available under CC-BY-SA unless otherwise noted.