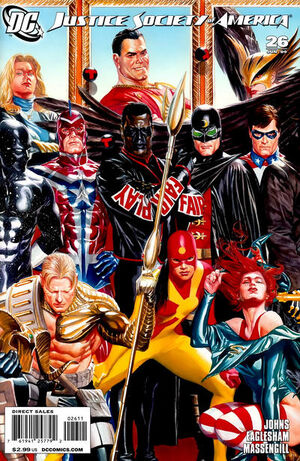 When the vets stand together, Court, Stargirl stands with them. You've grown up.

Courtney Whitmore and Mary Kramer get off a school bus near Courtney's house. She is angry because their recent battle against Black Adam ruined Courtney's birthday. When they get to the house however, they find the entire JSA roster waiting to surprise her. Everyone shouts Happy Birthday and Courtney is elated. Starman gives her presents, which consists of her own costume and Cosmic Rod. Damage and Hourman go out to get ice cream, but Damage is in a snit, claiming that he doesn't like ice cream. Back at the house, Wildcat bonds with his son and Alan Scott tells Courtney how much of an inspiration she has been for other young heroes. The heroes (as well as Courtney's family) present her with a large star-shaped birthday cake. Courtney blows out the candles and makes a wish. Her wish is to finally have her braces removed. The entire JSA accompany Courtney to the dentist, but unfortunately for Stargirl, she still has to wear them for one more year.

Retrieved from "https://heykidscomics.fandom.com/wiki/Justice_Society_of_America_Vol_3_26?oldid=1534070"
Community content is available under CC-BY-SA unless otherwise noted.