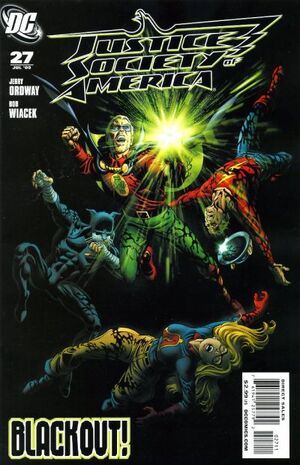 I'm protecting you all from a threat, Wildcat. I think it's the worst kind, Flash -- an invisible one... a ghost.

Appearing in "Ghost in the Darkness"Edit

Synopsis for "Ghost in the Darkness"Edit

Atom Smasher has a meeting with Mister Bones at a pub in Metropolis. Bones tells Atom Smasher that while he may have been pardoned for his actions with Black Adam in Kahndaq, the government is still keeping an eye on him, and his rejoining the JSA has brought them unneeded scrutiny. Atom Smasher receives a signal from Stargirl to meet him outside. Stargirl tells him that Obsidian sealed off the entire JSA brownstone and that his assistance is needed immediately.

When they arrive, they discover that Flash, Green Lantern, Liberty Belle and Wildcat are trapped inside, while the rest of the team remains outside of the building unable to gain entrance. Obsidian offers little explanation for his actions, but to say that he is doing this for the safety of the team.

The JSA find a nearby pedestrian who collapses before them. His name is Bill and he is apparently the host body for an angry spirit. The spirit leaves Bill's body then jumps into Stargirl's body. It uses the power of her Cosmic Rod to blast away at Obsidian's black wall that he has surrounding the HQ. Once the JSA realize what is happening, Power Girl uses some power cables to give Stargirl an electric shock, forcing the spirit to leave her body.

It is too late however. Stargirl's attack was enough to weaken Obsidian's defenses and the field of darkness dissipates. The angry spirit gains access to the building and uses it's power to transport five JSA members backwards through time where it reveals it's true identity.

The ghost is the World War II villain known as Kung, and he has brought the JSA back Hiroshima, Japan on August 5th, 1945, the day that the Enola Gay dropped the atom bomb on Japan.

In the present, the chronal disruptions has attracted the attention of one of the original JSA members - the Spectre.

Retrieved from "https://heykidscomics.fandom.com/wiki/Justice_Society_of_America_Vol_3_27?oldid=1519905"
Community content is available under CC-BY-SA unless otherwise noted.