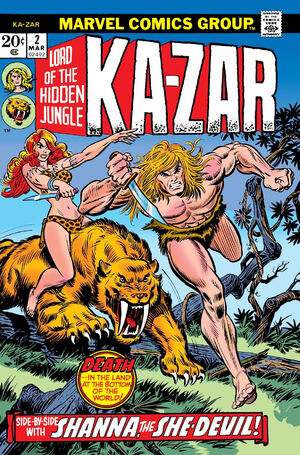 Appearing in "The Fall of the Red Wizard!"Edit

Synopsis for "The Fall of the Red Wizard!"Edit

Zabu rescues Ka-Zar and Shanna from the Red Wizard and Maa-Gor. Malgato tries to convince them that their willing sacrifice is required to maintain the Savage Land's warm climate, but when they refuse to listen to him, he ejects them from the castle through a trap chute that dumps them into the lake, threatening that they will soon see the coming catastrophe firsthand.

Returning to dry land, Shanna introduces herself to Ka-Zar, explaining how she had been abducted from her African jungle by Pterodactyls in the thrall of the Red Wizard. Shanna steadfastly refuses to believe in magic, theorizing Malgato may be a mutant to account for his powers.

Ka-Zar takes Shanna to the village of the Fall People, where the villagers are disappointed that the heroes did not accept the honor of being sacrifices. When a triceratops rampages through the village, the Fall People are convinced that Ka-Zar's blasphemy has doomed them and turn on him and Zabu. Shanna, concocting a plan, ends the conflict with the villagers by knocking out Ka-Zar and taking him back to Malgato's castle.

Shanna convinces Malgato that she and Ka-Zar will jump into his pit of flames willingly, but instead they leap at the fire bowl standing in the pit, knocking it over and ruining the sacrifice. Shanna finds and tears out the castle's wiring, confirming her suspicions that the pterodactyl that abducted her and the triceratops that attacked the village were robots when they start to break down. Malgato confesses that he exploited the people's legends to control them and escapes, leaving behind his robes and a rubber mask of his apparent face.

Later, Ka-Zar reconciles with the villagers, who promise to only sacrifice animals in the future. Shanna patches up Zabu and then leaves to resume her search for her father.

Retrieved from "https://heykidscomics.fandom.com/wiki/Ka-Zar_Vol_2_2?oldid=1439148"
Community content is available under CC-BY-SA unless otherwise noted.